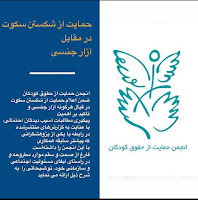 The Association of Children’s Rights would like to show support to the act of breaking the silence on any form of sexual abuse and highlight the significance of following up claims by the probable victims. After the published reports in relation to one of the researchers who had the previous experience of working with this association, regardless of correctness of the claims and in the sole act of fulfilling our social responsibility as an association, we need to add the following explanatory note

1- After the completion of the project, Plunder of Childhood(Yaghmaay-e Koodaki), and after presenting the results in June 2019, due to a member’s attitude in opposition to the children’s right agreement, violating some rules of the agreement and after two written warnings to the violator, the Association ended any form of relationship with the mentioned individual [Kameel Ahmady] in that year.
2- The association is ethically and institutionally responsible to act in full support of its members and colleagues against any form of violence and abuse in relation to the activities within the association. For this reason, the legal committee and association’s inspector are fully prepared to follow up any probable report about this matter until the end.
3- The association should attempt at preventing any form of abuse, including sexual and gender-based abuse, from happening and in an attempt at revising the recruitment process of new members to the association and other civic institutions, it is essential to take proper action, educate and compile preventive guidelines toward establishing equality and safety in working, scientific, education and social environments so that we no longer witness such acts of violence.

The ethical contract is the fundamental and inviolable principle of the scientific association, civic institution and the whole society in general. Following the ethical principles, the most important of which are protection and preservation of human dignity and security, is a vital responsibility beyond all other social responsibilities. It is seminal for every individual in society to undertake it. For this reason, deviating from it will result in social reaction against its violators.

Child Marriage Should Be Redefined


The latest report of Global Foundation, “Save the Children”, found that every year more than 4.5 million children younger than 15 years are forced to marry. It means every seven seconds one child marries! Here, I show why the concept of forced child marriage should be redefined.

An American Sociologist in Iran: Compare Occupy Wall Street with the Green Movement in Iran

Abstract
I was invited to a conference in Tehran on Occupy Wall Street. I was hesitant to accept because I feared that my criticisms of US policy through the lens of OWS might lend support to the oppressive Iranian regime, but I thought it might be an opportunity to express solidarity with the Iranian people against possible US or Israeli aggression. In the end I decided to go and found it an eye-opening experience.